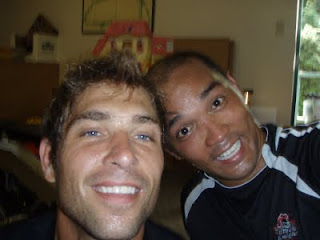 Viktor Berg has some serious Racket Skills. He is the only Canadian ranked in the ISDA top-eight and this guy has some serious on-court personality. He has been ranked #1 in doubles and as high as #39 in singles. He has been partnered with Damien Mudge, playing the right wall and has won pretty much every doubles tournament in North America. He's also played some very successful mixed doubles where he plays the left wall with Jessie Chai. Viktor is from Vancouver and runs Pro Squash Training Camps with Shahier Razik of Toronto. Ciaran and I trained under him this past summer and Ciaran has tried to adopt his two handed setup on the backhand. Viktor's style of play is very dynamic and incredibly exciting to watch, he promotes volleying the ball at every opportunity and applying pressure thru fast game play and hitting with pace. He pulls out all the stops whether it's faking the backhand drop then swinging his arm around his body to play the behind the back hard drive or chasing the ball to the backwall to play the boast then taking the time to fix his hair in the reflection of the glass. Unfortunately Viktor will suck back the occasional cigarette, but Viktor ranks tops in my book for best hybrid squash player.
Check out this video where Viktor is hitting the figure 8 drill to all four corners of the court. This guy is amazing!