It's finally here, the start of another squash season in Calgary. It's time to walk the walk and prove that the painstaking preparations haven't been all in vain. Competition season can bring out the best in players, but as we've all seen, it can also conjure up frustrations beyond one's control. After all but burning out on the courts in the spring, post-season rest is a must...even for the keenest of squash enthusiasts. Pre-season training is a time to visit the areas that created those frustrations in the previous year. But now the season is here and it's just time to play some squash. 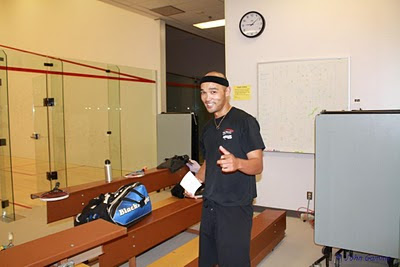 In the past few months, I've improved my fitness, my strength and my footwork. I tweaked my shots and modified my strategy in an attempt to dominate opponents with a faster defensive style. Forcing opponents to rush, hit looser and make more mistakes. I know that I can be quick on the ball, I know that my strategy is sound, I know what I have to do to win a point. So why so early in the season am I already getting frustrated? It's my contention that the idea of winning has created this frustration, because I'm still developing parts of my game that are nowhere near as strong as the skills that are fundamental to my gameplan. Yes the season begins tomorow, yes I am excited to get on court and play and yes I want to win... In my head I tell myself "move your feet, hit it tight, look for a loose shot and apply more pressure." but in the background I hear "You've worked so hard, attack the ball, move faster, step up and volley, you should be dominating this guy." I've written this rant to help myself to clarify how I play squash, to remember that squash is just a game, and to focus on the fundamentals that got me to the level that I play at now.
Remember when Andy Roddick was an actual contender at the majors. He had a bad ass serve and a bazooka of a forehand. Remember when he started to try to serve and volley, and attack with his two-handed backhand and fell outta the top 10, then top 50. He tried to do too much to his game, it wasn't natural for him, he was thinking way too much and not letting the flow of the game take the course of least resistance. About an hour ago, I read that Rafa Nadal just won the US OPEN. There was a comment in that article that Nadal had actually changed the grip of his serve slightly a few days before the tournament and was able to increase his serve speed by an average of 10 MPH. If you watched him play in the last 2 weeks, this may have gone unnoticed as he still had the fundamental gameplan, he stuck to his guns, he picked his wedgy and put as much topspin stank on that ball as he possibly could. Thank god I found that article because it reminded me how I play squash and that my little change in getting on the ball a little bit earlier is all I need to show improvement in my game. It showed me that I can't depend on the volley crosscourt nick shot, it showed me that I don't apply pressure with ripping the ball hard cross court. It re-inforced in my mind that I play slow, controlled straight up and down the walls to force mistakes with tight shots and long rallies. 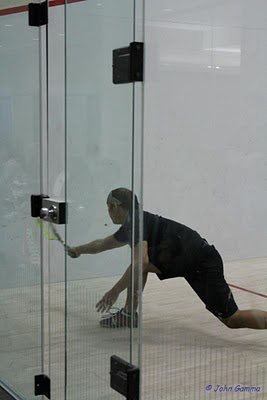 That's my shot, Mr.Dependable floaty backhand tight down the wall. It wasn't always a great shot, it took a lot of practice burning the shot into my muscle memory under all sorts of circumstances. But sometimes he goes on vacation, sometimes Mr.Dependable has become Mr.Loose cross court or worse Mr.Pound it into the tin. Here's where I'm going with this, I've learned to build my strategy on this shot, I need this shot to work if I'm going to be able to stay in a rally, if it's off, I need to find it, I need to get on the ball early and hit my target. I can't look to hit shots that aren't practiced enough hoping by some miracle that I will hit it better than I ever have before just because I can't hit a backhand tight down the wall. I'm not saying don't use your new guns, I've been working on this ridiculous crosscourt drop (ala Derek Shtand) and the straight push drop tight to the wall, I'll just be looking for safer opportunities to test out my new weapons. With all the hoopla of a new season, we can all stand to take a minute and breathe...overt your eyes from the doves that were just released, the blasting fireworks in the night sky and the cheering crowds. It's time to remember how you play squash and if you can do that, you might get lucky and come out with a W.
Posted by Domi at 10:14 PM