This is your Brain on Squash...any Questions?

Even if you're only a semi-serious squash player, being an athlete and competing in squash will sooner or later help to define how you see yourself and dictate how you feel and think. It's what you do and who you are, it's how you've committed your blood, sweat and tears, it's the investment on court that has come to shape your sense of identity. At every level in squash, from novice to professional, players will eventually come to see themselves in terms of their squash. Squash brings a player the recognition they may be lacking in other areas of their life. Your mood is often dictated by how well you played last night or an upcoming match. At the novice levels, the huge gains and initial improvement builds the ego and provides a great source of self-esteem. For competitive players, mastering new skills, overcoming challenges, attaining victory and gaining strength provides the enjoyment and satisfaction that provides them with the motivation to keep playing. 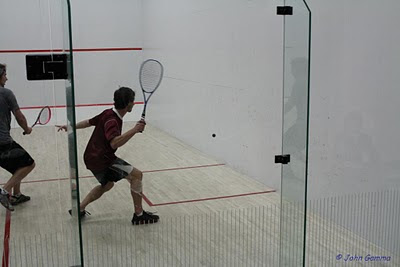 But with all the positive aspects involved with playing squash, being competitive often leaves players feeling wiped, and losing may drain one's psyche dramatically. It's the all too common squash-sob story that everyone has experienced. Losing to players who are technically and physically inferior; playing a combination of brilliant shots only to finish lazy and uninspired; focusing on all the negatives while dictating a point. The intensity of squash can be extremely taxing on the brain, leaving even the most talented players feeling burnt out, and although often euphoric may lead some players to abandon the sport. So what's the solution? 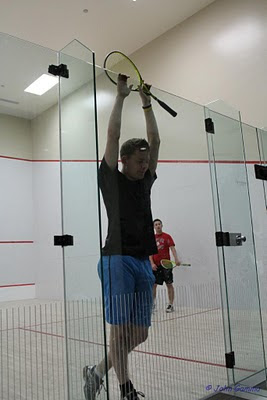 Winning squash is about controlling time. Many players use time to apply and relieve pressure - playing the ball early, slowing the game with high tosses and moving with efficiency. But many players neglect those precious moments of time between points. It's these split seconds where players allow those negative thoughts to fester and turn into devasting losses. It's those extra ticks on the clock that can be used to turn the tide of a match. I don't know what you need to tell yourself during the time between points. But if you're thinking negative thoughts between points, when will you find the time to be positive and get yourself playing your absolute best squash?

I have no idea what goes thru my mind between points, but I'll bet that if I made the effort to focus on my strengths, I would find more success and my mind would feel less fried after a match. just saying...
Posted by Domi at 9:57 PM