There are currently 7 of us on the Eau Claire Y men’s Level 1 team, including myself, Trevor Slaughter, Derek Shtand, Paul Adamiak, Ciaran Godfrey, Andrew Gilbert and of course our coach Kevin Doucet. It appears that after the few years we’ve played together, our improvement hasn’t gone unnoticed by many other squash players in Calgary at all levels, at many other clubs. From the outside looking in, we appear that we’re the best of friends(which we are) and have been playing together forever(which it feels like). But the fact is we didn’t just come together one day and decide to play squash. Each of us has a story and each of us brings something different to the table. We all love to play squash and we all have a unique approach to how we play the game.  So here’s my(our) squash story, a bit of a re-cap of how the team has come together, at least, it’s how I remember things, how we have improved together and how we continue to stay motivated as a team. 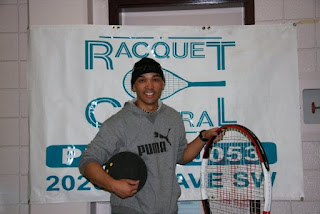 Very well, where to do I begin. Prior to 2002, I had played a handful of squash matches with the same 5 guys from university; Murray Allan, Mike Crawford, Rob Langen, Andrew Bird and Garnet Knopp. I had never done a drill, I had never had a lesson and I didn’t know anyone who played real squash. In fact, I had never even seen good squash and I didn’t know anything about it. I do remember walking through the university courts about 10 years ago and watching Kyle Doenz doing a figure 8. I couldn’t even comprehend what I had just seen.
So, in my third year of university I started playing squash with my classmates in December and by January we all entered the geologist’s squash tourney. None of us had played a squash tournament before, but it was free food, free drinks and free for students, we couldn’t go wrong. I entered the E division and played Mike, then some guy named Lou, then I played Rob in the final to win the first squash tournament I had ever entered. I still have the trophy(beer mug), with “Men’s E division Champion” engraved on it. I didn’t play that much squash after that until the next year, when we all entered the tourney again and I lost my 2 matches in the D division.  Following that, I didn’t play much squash for about 3 years. At this point, I hadn’t caught the squash bug yet, but for some reason, I still remember thinking that I was pretty awesome.

Over those first few years out of university, I hit the squash ball around a few times with my buddy Davin Wine, in fact I thought I was pretty good, having won an E division championship back when I was in school. But then 8 years ago, by serendipity, I got a job working downtown in Calgary. One of my bosses, Jim Kelly was a level 3(high B) squash player, this was back in the day when the top interclub level was “A”, then levels 1 to 12. I told Jim that I was pretty good, so he took me to the Y to play squash and proceeded to kick the crap out of me.  What the hell? How could someone so old, be so good? It was embarrassing, Jim got to the point where he just gave me a lesson on boast-drive. A few weeks later, Jim recommended I play the geologist tournament again and I did. Jim figured that I was a C player, (I realize now that he was just being nice) so I played my first C tournament where I scored a total of 6 points in 2 matches, talk about demoralizing! But I will never forget losing 9-2, 9-1, 9-0 to Chris May, then losing 9-1, 9-1, 9-1 to Al Rutherford. That’s when I set my first squash goal – to come back next year and win the C division in geologist’s tourney.
At the tourney, I met Darren Tisdale and Terry McCallum, (who knew Jim from the Eau Claire Y). One of their teammates was injured, so they asked me to sub for their interclub team. I played 4 times and played a round of playoffs for the Eau Claire Y Men’s level 11(it would be level 12 now) team.  That year I also joined a box league and played in the oilmen’s squash tournament. Looking back, I thought I was so good, but I was so terrible that I actually had to get stitches on my eyelid, I got a concussion and had countless welts on my legs, back, arms and had injured several people with my wild swing.

I met 4 other people at the geologist’s tourney, including the women’s champ Solana Jear, the men’s champ Dave Safton and other A division players Dell Pohlman and Brian Fyke.
Solana was a member at the Y and played in the box league, it took a while to get her out, and I remember cracking her hand with my racket. Oops! She was really nice, but it was a little while before we played again. I harassed Dell and he came down to the Y, he toured me around the court for a bit then showed me a simple volley drill, he was really motivating and inspired me to cut everything off if I could before running around like a crazy person. Then after months of unreturned emails, Dave Safton finally came out to hit with me. I don’t remember actually hitting with Dave as I couldn’t even keep up in the warm-up. Dave gave me the best advice that anyone has ever given me, something I still think about today. He said “I’m not a coach, if you want to get better, you should get some coaching from one of the local pros.” He essentially told me where to go and how to get there.  And that’s just what I did, I met with Ken Cross at the UofC and proceeded to get weekly lessons. After I started lessons, Brian Fyke organized a clinic run by Leona and Matt Grigg. This one clinic blew my mind! I had never seen racket skills like that before and the simple things they said like “hit the ball away from your opponent” or “get back to the T” and “try to keep your racket ready to swing”. This is when I caught the squash bug. 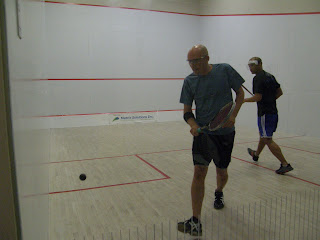