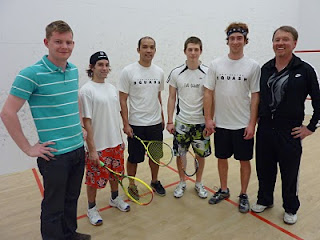 The Eau Claire YMCA has made an impact this year in the Calgary Interclub Squash league boasting a dynamic Ladies team and the cities youngest Men's team, both of which finished off their seasons in First Place and both claiming the title of Playoff Champions. We also take credit for the Bow Valley ladies as they are all part of Eau Claire Squash.

The Ladies level 4 team, after having disbanded and going their seperate ways in the 2008/2009 season were reunited in the summer of 2009. The ladies team suffered only 1 team loss this year and finished the season well out in first place. They capped the season off by pummelling their competition 5-0 in their semifinal match. They continued to leave no doubt that they deserved the crown by demolishing their opposition 5-0 in the Ladies level 4 final. Congratulations to Adele Mansel, Sandi Wingert, Sandi Schaefer, Faye Mak, Barb Wyrsch and Jodi Beaugrand on their excellent work this season. 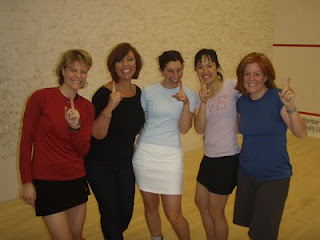 Bow Valley Club's Ladies level 2 team, having moved from the Eau Claire Y last year due to renovations, also had a stellar season. The level 2 ladies managed to drop only 2 team matches this season and claimed the top spot. The semi-final pitted them against a determined team that came within one game of de-throwning the BVC ladies. The ladies were back on track in the final where they won 4-1 to become the Ladies level 2 playoff champs. Congratulations to Solana Jear, Carol Vallee, Sandy Deren, Irena Sinclair, Michelle Hollins and Helen Newsome on their continued success.

Having just squeaked into playoffs last season and knocking off the top team, the men's level 3 team fell short of a playoff championship in the 2008/2009 season. In their second year together, with new comer Ciaran Godfrey, the men's level 3 team was the youngest team in the league. Each team member brings a style of their own out to the courts and teams were easily out run, out hit, out paced, out played and outlasted. Dropping only one match due to poor olympic scheduling, the men's level 3 team cinched up 1st place with weeks before the season was over. The highlight of the year was Trevor Slaughter's huge semi-final upset on the only undefeated player in the division. With their coach Kevin Doucet courtside, the rest of the team continued their winning ways taking the semi-final in a 5-0 victory. The team carried on the momentum of a championship season and took the final 5-0, with Paul Adamiak refusing to lose in the 5th game despite being down 7 match balls to win 12-10. Congratulations to Trevor Slaughter, Derek Shtand, Paul Adamiak, Ciaran Godfrey and me (Domi Diaz) on taking squash to a new level at the Eau Claire Y.
Posted by Domi at 3:51 PM