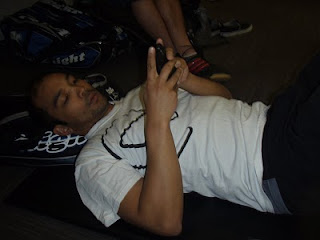 It was 2 years ago that Trevor and I played Level 3 (which would be considered level 4 now) and won the season and then the playoff championship with our captain Dale Sivucha, 2nd Guy Schuler and sub Luke Vanderbaaren. Dale and Guy taught us how to win, they never really showed us anything technique wise, winning was more about using the skills that we had, which for me and Trev was running and retrieving and hitting the ball hard.

Since these times, Trevor and I have improved tremendously. More so for Trevor is his ability to move on the court. The game that he has developed is fast and constant forcing opponents to play at a pace that creates mistakes and indecision. Trevor has also developed his short game allowing him to move the ball into every corner of court quickly. On the other hand I am content to play the ball much slower and I am focused on hitting the ball tighter and to good length, although I am struggling with my front court game, I know that it will eventually get to the point of being an attacking shot for me...just not right now. Recovery out of shots is and controlling the T is also my focus however they seem to deteriorate towards the end of the match. I find that I often wait for players to clear their shot before moving to the ball although they may not grant me that same courtesy...definitely a mental barrier I need to remedy.

Anyhow, squash is among the many depressing things that have gotten me down in the last few months. Seeing an improvement in my skills only to have a decline in my ability to win has been more than a frustrating experience. I see the same frustration in many of those that play in Calgary...putting all the time and effort to improve only to get your ass kicked. At the Alberta Open, I realized that having a good support team is important and that having the wrong one can be devastating. The change in my game in the last 2 weeks has been to focus on winning and although I've had some big wins, I realized that the focus was not actually on winning, it was the process of winning a point.

On court against weaker players or in meaningless games, I am content to attempt shots that I would otherwise likely not play on a regular basis, this has allowed me to at least call upon these shots and combinations of shots during a tough match just to try and mix things up. But even then, the focus is on hitting targets and keeping it tight, controlling the T and moving in and out of the ball efficiently. My game plan is simple, force the guy behind me and make him play better shots, and when it pops loose hold and hit the ball where he isn't...not always easy.

It will be nice to take a break after nationals for a little while to get away from all things squash. But when I come back, I fully intend to be another 10lbs lighter, moving in and out of the front court efficiently and controlling the court with my shots and dominating the game with my feet. 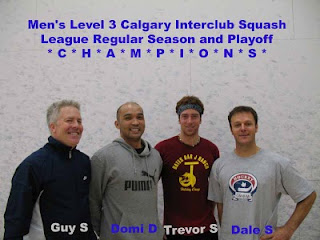